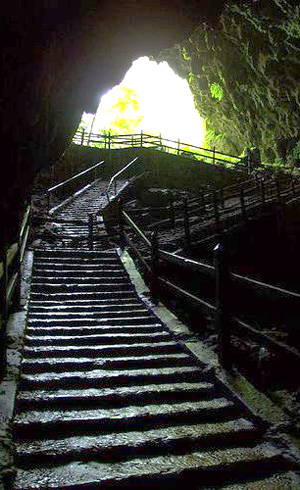 In terms of popularity, Sentani Lake is definitely well-known among local travelers. The good thing is that the site offers interesting nearby attractions as well, including Rukhabulu Awabu Cave. The location is in Ayapo Village and it resides in karst hills, as well. That means tourists need to conduct a short trekking in order to get to the cave. Once they reach the site, they can do interesting activities like exploration and learn the history of the cave actually. Have no worries. The locals would help them when it comes to direction and information.

The Nuance
As mentioned before, the cave is located on karst hills. Despite the secluded location, it has an easy accessibility and a simple route. In terms of size, the cave is not quite big but it looks unique for sure. Once tourists arrive at the site, they may notice beautiful surrounded scenery as well. These include several dry trees and bushes. What about the atmosphere? It is definitely cool in the morning, but it becomes hotter at noon. Due to the fact, tourists should come either in the morning or afternoon in order to avoid the uncomfortable heat of the sun.

Exploring Rukhabulu Awabu Cave
The most attractive allure of the cave is related to its history. According to the locals, the cave was used by human for living back then. Even some historians have approved the information due to the physical condition of the cave and the presence of fountain located near to it. Plus, there are several archeological findings like food leftovers, potteries, animal bones, etc. These indicate that several people live in the cave in the past.

What is more? After hearing the history and information about the cave, tourists should start exploring the site. As mentioned before, the size of the cave is not quite big. Still, visitors can conduct caving comfortably there. Inside, the interior looks dark and feels damp. No bats live there, though. That means tourists won’t get disturbed by bats’ dung during the exploration. As for the tip, visitors should have prepared a flashlight beforehand.

After caving, the next recommended thing to do in Rukhabulu Awabu Cave is photography. Even though the site is both sacred and historical, everyone is allowed to take pictures there. The only thing that tourists should not do is littering. Just because there is no keeper, doesn’t mean visitors can spoil the environment or do careless things there. Carrying and eating foods on the site are allowed, as long as they take care of the trash later.

How to Get There
From Jayapura City, travelers can take any local transportation service and head to Ayapo Village. The distance is 17.8 km, so the trip would take about 40 minutes. It can be faster if they ride a good vehicle and take Raya Abepura Street. The trip even involves a short trekking to the karst hills (where the cave resides). Thus, everyone should wear comfy footwear when heading to the site.