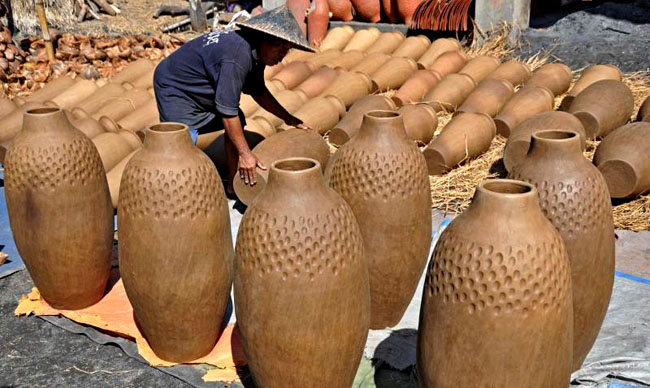 When visiting Sentani Lake in Papua Province, tourists should not miss the opportunity to visit several cultural villages (located near to the lake). For example, there is Abar Village in Ebungfauw Sub-District. This small and serene local settlement is known for its signature handicraft called “Gerabah” or pottery. Even though Abar is not the only place where potteries where produced, it is without a doubt the famous one among the others. No wonder, the locals are able to create valuable products and attract more tourists to come to the village.

The Nuance
As the time goes by, pottery vanishes in Papua Province. Abar becomes the only village that survives such decline in popularity. This also explains why travelers’ prime motive to come to Abar is to witness the making of “Gerabah” done by the local women and buy some products as a souvenir. Once tourists arrive at the village, they may see only women who do the making. Without any modern tools, the villagers create such unique products passionately! They do not even have an official workshop, as they would do it anywhere (especially the house terrace).

Exploring Abar Village
Before exploring the site, tourists should learn the history of Abar Village beforehand. In terms of age, this local settlement is indeed old. There is the proof, in fact. It is the archeological findings of an ancient settlement site of Neolithic culture. Plus, the locals have retained the art of pottery for decades. Thanks to the abundant and good clay landscape that scatter in some parts of the village. Thus, villagers can take advantage of the clay to make those potteries.

The information regarding Abar Village’s history can be obtained either from villagers or tour guides, actually. What is more? The next recommended thing to do is to watch the making of pottery done by female villagers. During the process, tourists can even learn the technique and ask some questions. Here is the unique thing. The crafters apply traditional methods and use open burning equipment instead of an oven. Even though it takes longer than modern procedures, it looks more authentic and has a more value!

“Mace” or local female potters are quite friendly and they are ready to teach tourists how to make a pottery. The technique is simple and it takes only about an hour to finish a product. As for the workshop, the locals usually use their house’s terrace to make a pottery. Moreover, they conduct such activity while chatting with other potters! Sounds fun?

How to Get There
From Jakarta, tourists need to take an airplane to Papua Province (Sentani Airport). It takes about 8 hours, though. Once arriving at the village, they can either visit Sentani Lake or directly head to Abar Village in Ebungfauw Sub-District.